Institution: NORCE and University of Bergen 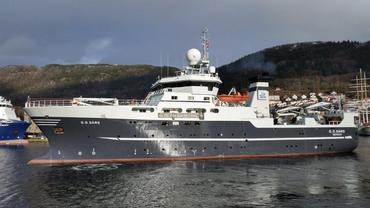 The research vessel G.O.Sars, named after the Norwegian marine biologist Georg Ossian Sars, operates the Nordic Seas including the Barents Sea and the North Sea. The ship is owned by the Marine Research Institute in Bergen, Norway, and has since 2003 been equipped with a system for continuously measuring pCO2 in surface water as well as in the atmosphere. In addition, dissolved oxygen and hydrography is determined.

The Nordic Seas are important mixing areas of waters coming from the North Atlantic and the Arctic Ocean, and in this area we find one of the major sources of deep water formation. The seas are crucial as spawning and feeding areas for a variety of marine species and also an important areas for the fisheries.

An improved knowledge of the physical, biological and chemical processes in the area will help us learning more about how and how fast the climate is changing. One of the processes we are interested in is ocean acidification, which is the result of increased marine uptake of CO2 from the atmosphere. Further, we want to learn more about how much manmade CO2 is absorbed in the Nordic Seas, and how this is distributed between the different areas.